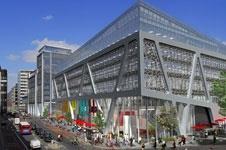 The secretary of state said the scheme by Thornfield Properties and the City of London would "significantly detract from the market complex as a whole".

A Thornfield spokesperson said: "We clearly are disappointed by the secretary of state’s decision.

"Thornfield will now give careful consideration to the government decision and comments contained in the inspector’s report.

"We will then bring forward, within a short period, revised proposals that take account of the secretary of state’s comments."

The property firm entered a partnership with the City of London, the freehold owner of the land, in 2002 to redevelop the neglected 19th century buildings on the disused west side of the market.

Thornfield has been working on the 480,000ft² design for over five years. The scheme gained planning permission back in April 2007 following architect Kohn Pedersen Fox's revised design.

It had already come under attack by English Heritage and SAVE who said it would damage area's character.

The spokesperson added: "We will consult widely on our new proposals with a range of stakeholders including the City of London and English Heritage together with the Smithfield market traders.

"We have a signed section 106 agreement which includes work on the Thameslink tunnels and it is vital that we maintain the momentum so that this important work can be completed on time."