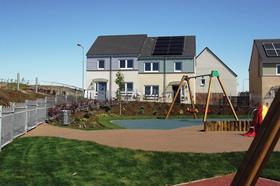 The government plans to cap the amount of money that housebuilders will have to spend to meet the zero-carbon homes standard from 2016 through off-site carbon saving measures.

The government said the cost of providing “allowable solutions” - where housebuilders undertake actions outside of the building itself to contribute towards meeting their zero-carbon obligations, such as renewable energy schemes for the community, or paying into a fund focused on abating carbon – would be between £36 per tonne CO2 and £90 per tonne CO2.

The consultation estimated the central option of £60 per tonne CO2 would add up to £2,123 to the price of a detached house.

The impact assessment of the policy estimated introducing allowable solutions would cost the industry a maximum of £224m per year.

However, it said this was an “overestimate” and the burden was likely to be less than this.

But it did say the policy constituted a “substantial” additional regulatory burden under the government’s rule of introducing only one regulation on industry for every two removed.

It also said four routes for implementing allowable solutions were under consideration:

The consultation is open until 15 October 2013.

“The combined elements of this policy of fabric and carbon compliance and allowable solutions is going to put small house builders out of business because it’s too complex,” he said.

He added that it was “not acceptable” to change building regulations in 2014 and then again in 2016.

David Bownass, sustainability director at WSP in the UK, said the final policy should be shaped to promote the most effective way of reducing carbon.

He added: “In thinking about this we should also consider the end consumer, the home owner. A future zero carbon home that addresses all the carbon emissions on site through PV will have a very significantly lower operating cost to one where the builder just met the carbon compliance threshold and bought out the residual carbon emissions.”