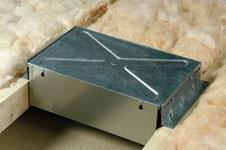 The government is set to announce the creation of 10,000 jobs insulating public and private homes in the pre-Budget report today.

Rob Annable, architect for Axis Design, said: "10,000 people sounds like a good start.” Annable's firm, Axis Design, won this year’s Building Sustainability award for its Victorian eco-terrace scheme. “The biggest challenge is to make sure 10,000 homeowers are willing to get involved in the idea,” Annable continued.

He also had questions about the exact nature of the insulation. “If it’s wall and floor insulation, that’s quite a big commitment and is going to change the way you feel about the house.”

Reports in the Guardian suggest that the insulation programme was a sop to the green movement. Treasury is said to have squashed a wider “green new deal” as espoused by Barack Obama for fear of overspending. The large investment would have encompassed wind farms, solar power and tidal barrages.

The chancellor will deliver the pre-budget report in the House of Commons at around 3pm when he is expected to announce that billions' worth of public construction would be brought forward.