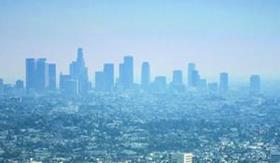 The government is being urged to use pollution-eating construction products as part of the air pollution plan it needs to submit to meet EU regulations.

Roofing and facade manufacturer Marley Eternit has suggested the government should use photocatalytic technology on buildings and roads, which effectively ‘eats’ excess levels of nitrogen dioxide (NO2) and nitric oxide (NOx) from the air.

In April the Supreme Court ordered the next government to make plans by the end of 2015 to tackle the UK’s air pollution problem, with 16 cities across the country having failed to meet EU standards on nitrogen dioxide levels since 2010.

Product manager at Marley Eternit, Gavin White, said the government needs to take a two-pronged approach to tackling air pollution, addressing both polluters and pollution itself.

This can be done by using the technology, e.g. as photocatalytic coatings on roofing tiles, in roads and building roofs to absorb the nitric oxide created by road traffic exhaust fumes, the main cause of air pollution.

He said: “Using typical data on pollution levels in urban areas, coupled with our laboratory test data, we estimate that over the lifespan of an average sized roof, the amount of NOx the tiles will remove could be equivalent to that emitted by a modern car covering over 100,000 miles.

“Indeed, we estimate that the tiles have already saved millions of miles in pollution since they were launched.”

Photocatalytic technology is currently used in countries such as Japan and the Netherlands to meet air pollution targets.