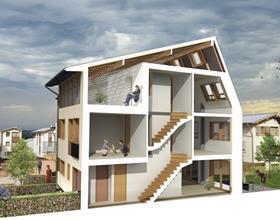 The government is to water down its 2016 zero carbon homes target by excluding small housing sites.

The government has repeatedly said that it is “committed” to the introduction of zero carbon homes in 2016, a policy set-up under the previous Labour government.

But as part of an announcement this morning on the government’s plans, which are to be confirmed in the Queen’s Speech this week, the Liberal Democrats revealed that the plans had been watered down to exclude smaller developments.

The Lib Dems said the move was aimed in part at exempting small housebuilders from the requirements, with the government to set out further details on what constitutes a small site following consultation.

The Lib Dems said that the zero carbon standard would mirror level five of the Code for Sustainable Homes, which is currently used for highly sustainable developments.

But under the plans, larger developers would only be required to build to code level four as long as they offset the additional carbon through other projects, such as energy efficiency retrofit work.

The offsetting scheme, known as allowable solutions, was consulted on last summer and will cost between £36 and £90 for every tonne of carbon offset, though a Liberal Democrat source said the party was pushing for a price closer to £90.

The price of carbon under the scheme is crucial as it will dictate the value of the offsetting projects the developer is required to undertake.

Stephen Williams, communities and local government minister, said: “The effect of ensuring these homes are zero carbon will be absolutely massive in environmental terms.

“By 2016 we will have gone from having some of the most energy inefficient houses in Europe to leading the world by being zero carbon, not just during construction but throughout the lifetime of these homes.

“This is the single biggest step towards greener homes that any government has made.”

Paul King, chief executive of the UK Green Building Council, said it was “deeply worrying” that small sites would be excluded from the zero carbon homes standard.

He said: “This decision could cause confusion and lead to perverse outcomes, for example the slowing down of housing supply as developers phase the delivery of ‘small sites’ to avoid regulations.”

However, he said it was “good” that the government would be publishing its plans for allowable solutions soon.

He said: “The industry urgently needs clarity on this part of the policy and we look forward to hearing more details in the Queen’s Speech on Wednesday.”

But a spokesperson for the Home Builders Federation said excluding small sites would not have a “significant” effect on the UK’s ability to meet its climate change targets.

He said firms building 100 homes a year or less, which he said were more likely to build on small sites of 50 homes or less, only accounted for 16% of new homes each year.

Philip Sellwood, chief executive at the Energy Saving Trust, said he was “concerned” about changes to the zero carbon homes pledge that would “ultimately cost householders money because of escalating fuel bills”.

He said: “Unfortunately these changes to the zero carbon home regulations will only serve to encourage the building of lower standard new-build homes and make it tougher for the UK to achieve the 80% carbon reduction from buildings.

“This short-term vision will only serve to damage consumers in the long-term who are stuck with new homes that are not up to the highest standards of energy efficiency.”