The Green Deal firm owned by Neville Wiltshire from the BBC’s The Call Centre collapsed owing £2.6m to trade creditors 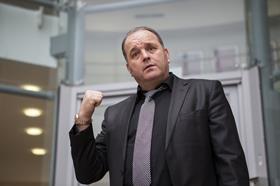 Dozens of installers are among those owed £2.6m by the collapse of a Green Deal assessor over the summer.

Last week a report by the accountants Deloitte, filed at Companies House, revealed the firm went under owing £2.6m to hundreds of trade creditors, many of which were Green Deal installers.

NES was set up in 2005 to provide energy assessments and free energy efficiency retrofits through the government-funded Carbon Emissions Reduction Target (CERT).

It downsized after the scheme was replaced by the ECO and Green Deal at the beginning of 2013.

In a statement in August the administrators said: “The delays in launching the ECO scheme along with significant limitations in its coverage and a lack of a consistent energy policy from the government have led to a major reduction in funding during recent months.

“Despite efforts made by the directors to secure new contracts, the lack of sales has led to cash flow constraints and so reluctantly, the directors have had no option but to cease trading and to appoint administrators.”

Allan Durning, director of insulation consultant APD Consulting, said installers felt they were “carrying the can” for the collapse of Nationwide.

“The sentiment from installers is why are these middle men, agents, going under and leaving us out of pocket?

“There’s something badly wrong with this ECO and Green Deal situation. Installers are all a bit battered and bruised.”