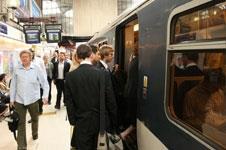 Victoria underground station is to receive a £695m redevelopment after the transport secretary belatedly gave the project the go-ahead.

The revamp of Victoria’s tube station was the subject of a three-month public inquiry at the end of 2008, which concluded in January this year.

Transport for London’s £695m works programme will include the construction of a new ticket hall, seven new lifts, and nine new escalators. The scheme will increase the size of the station by about 50 per cent.

Boris Johnson, mayor of London, welcomed the government’s approval of the scheme. He said: “For many people, Victoria station is the gateway to central London, and for a long time it has been creaking under pressure from the sheer number who use it every day. This key upgrade will transform the experience for those using the station - making life easier and more convenient.”

Mott MacDonald was appointed lead consultant on the scheme two years ago, and will bring the project through the detailed design stage to construction.

If the TfL board approves funding for the project in the autumn, construction could begin as early as next year. Completion is anticipated in 2017.