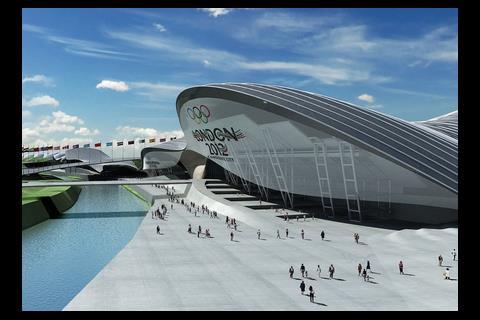 Hadid has already simplified her original design (top) to the one below. 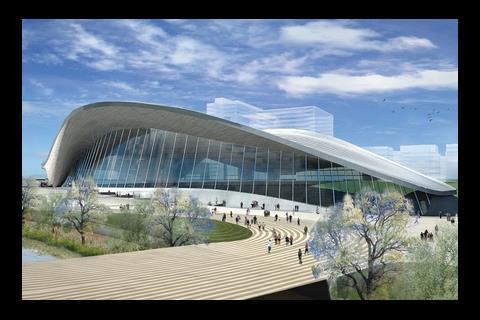 Now it seems the contractors are to repeat the process …

It is understood that the contractors shortlisted to build the centre are working with the Olympic Delivery Authority (ODA) to value engineer the design, effectively cutting Hadid out of the process.

Balfour Beatty, Hochtief and Eiffel have been shortlisted to build the centre. However, it is understood that the contractors are asking consultants to rework the designs to cut back on costs before they submit their final bids.

A source close to the scheme said: “There’s obviously a cost problem with the way it’s designed at the moment. It was difficult to find contractors

to bid at that price so the ODA has obviously told contractors to rework the plans.”

One of the main targets for cost-cutting is believed to be the signature roof, which has already been scaled back by Hadid at the ODA’s request.

It is understood that Hadid is being kept at arm’s length from the latest design process.

In November, Hadid unveiled a severely scaled-back design for the centre, which originally had a £75m budget. The wave-form roof was nearly a third of the size of the original – 14,000ft2 compared with 35,000ft2. The ODA has said it will not reveal the final cost of the centre for commercial reasons.

The ODA is also working to reduce costs on the designs for the Olympic stadium. A revised outline of the project was expected to be confirmed after Building went to press.

A spokesperson for the ODA said: “We’re going through the routine review as we move from design stage C to D. The design won’t fundamentally change.”

“Hmmm. Is it just me or does this logo seem to portray a standing couple engaging in distinctly non-Olympian activities? Picture it with the Olympic rings on the lady’s head and the London bit on the gentleman’s arm …”

This was one reader’s analysis of the logo for the Olympic Games, which has been mired in controversy since it was released on Monday. Have your say at www.building.co.uk/whatyouthink

The ODA claims it is close to finalising a deal with construction trade unions on direct employment of workers on the Olympic site. David Higgins, the ODA chief executive, said the deal would include an agreement on maximising direct employment and guaranteeing better conditions for site workers.

The full history of the design can be read at www.building.co.uk/archive