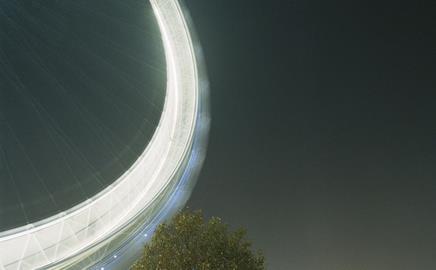 The London Eye is to be refurbished by a project team led by Halcrow Yolles.

The team also includes project manager Cyril Sweett and architect Ash Sakula. The Eye’s original architect, Marks Barfield, is not involved in the refurbishment, although it will undertake some small-scale works on the boarding platform.

The refit, which will be completed in 2011, is aimed at making the Eye fit for the next 20 years of operation. Planning permission was originally given for five years, but it was recently granted permanent permission. The a lease on the site is for 24 years.

It is understood that the Eye was originally built to last longer than five years but after seven years of heavy use, some elements needed upgrading. This included the control systems and the 32 pods used to carry passengers.

Work on the pods will include air-conditioning systems that are understood to have never worked satisfactorily. It will also include an interior revamp, but no changes to the external appearance of the Eye.

The Eye will continue operating while the work is being carried out. Currently it is closed for 10 days in January for maintenance work, which includes changing the rubber tyres, located between the rotating and non-rotating parts of the structure, and lubrication of the bearings.

After seven years of heavy use, some elements need upgrading

The first stage in the refurbishment will be to build a prototype to prove the design solution will work, and then a spare pod will be fully refurbished ready for installation.

Once complete, this pod will be switched for an old pod on the Eye so it can be kept working.

The pod that has been removed will be refurbished, switched for another old pod and so on until all 32 pods have been refurbished.

Next week a book called Eye – The Story Behind the London Eye is being launched by Black Dog Publishing. This includes a collection of photographs of the structure and the story behind the Eye’s conception, development and construction.