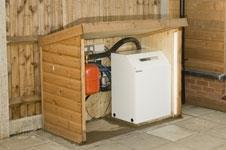 Local authorities which require a Merton-style minimum percentage of renewable energy generation on new builds are being misled by the industry because heat pumps consume lot of National Grid electricity in cold weather.

“They claim their systems meet and exceed requirements in renewable energy. But while you can achieve good figures in terms of renewable energy input in Kw hours the carbon saving is considerably less.”

Many planning officers muddle up energy use and CO2 emissions, added Rendall, who is strategy director for ECSC’s C Plan software, an energy tool for planners.

Heat pumps tend to be specified for heating instead of gas boilers, which are increasingly energy efficient. The pumps, a form of compressor, are frequently advertised as offering 3 or 4:1 energy efficiency ratios (COP).

But in cold weather, this can drop to 1.5:1 COP, Rendall claimed. While energy efficiency gains are still made, the increased power comes from the National Grid, only 1.5% of which comes from renewable sources. Therefore, heat pumps are relatively inefficient in terms of CO2 emissions. In other parts of Europe with a better renewables mix (carbon index) the sums are different.

But Robert Meeks of installers, ICE Energy Pumps, disputed the figures, adding that he only expected 1% of an overall yearly heating bill to come from additional heating. His system is designed to work to -3 Centigrade without additional top-up, he said.

“This is to ignore the overall picture that, during the year, in total the COP has averaged over 4 COP and saved 50% of the CO2 emissions of any gas boiler.”

Meeks added that imminent additional of renewable power into the grid, such as 28GM of wind turbines, would mean additional CO2 emissions from heat pumps would be ‘dwarfed’ by those of gas boilers, even if those hit 100% efficiency.

Energy minister, Malcolm Wicks, recently announced that planning rules would be relaxed to allow heat pumps to be installed without requirement for consent, effectively adding them to the list of renewable technologies.

Heat pumps move stored solar energy from the ground into the home to provide a total solution for Domestic Hot Water (DHW) and all heating needs.

Because heat pumps simply move energy, rather than creating it by burning fossil fuels, they are very efficient. For every 4KW of heat moved into the house only 1KW of electricity is consumed. This gives a perceived efficiency of 400% sometimes stated as a Co-efficient Of Performance (COP) of 4:1.

Collecting the Heat
Heat collection is achieved by installing a series of pipes in the ground. They are buried a metre deep and contain a water glycol mix at a low temperature. The surrounding soil is at a higher temperature, typically 10-13°C and gently warms the glycol mix as it is pumped around the ground loop.

A temperature increase of the ground loop fluid of just 3 or 4°C; is all the heat pump requires. The returning warmed liquid is fed into a heat exchanger/Evaporator.

The Evaporator
The purpose of the Evaporator is to take the collected heat out of the ground loop liquid and return it cooled to the pipe for the next cycle. It does this by using a refrigerant that boils at approximately -10°C, the act of boiling turns the refrigerant into a vapour which is then moved into the Compressor.

The Compressor
The Compressor does exactly what its name suggests; the vapour is compressed in volume and as its volume reduces its temperature increases. Temperatures of between 75 and 125°C are achievable and the gas is then fed through a heat exchanger.

Condenser/heat exchanger
Feeding the hot gas through a condenser allows the refrigerant to turn back into a liquid. As it condenses it cools and releases its heat through a heat exchanger into the DHW and central heating system.

The Expansion Valve
To complete the closed circuit of the heat pump the only thing which needs to be done is reduce the pressure of the condensed liquid and this is done via an Expansion Valve.