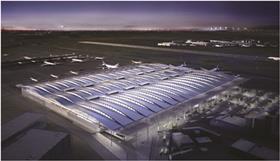 The under-construction £2.5bn Heathrow Terminal Two will be the UK’s first BREEAM-rated airport terminal, the client has said.

Heathrow’s director of planning and programmes Phil Wilbraham told the Ecobuild conference in London the firm was working closely with the BRE to create a new BREEAM category that will cover airport terminals.

Wilbraham said it was “too early to say” what rating the terminal will get. The terminal will partly be powered by a biomass boiler fuelled by woodchips and solar panels placed nearby.

Ferrovial, Laing O’Rourke and Balfour Beatty are building the Luis Vidal and Foster + Partners-designed terminal, which will open next year.

Wilbraham said that after the second phase of development (2014-19) Terminal Two will deal with 40-45 million passengers a year and be similar in size operationally to Terminal Five.

Heathrow plans to close Terminal One in four-five years time and Terminal Three in 15 years time as the capacity of Terminal Two increases, Wilbraham said.

Wilbraham was speaking at an Ecobuild panel discussion about integrated infrastructure.

Two of the other panellists urged the government to do more to boost infrastructure and stimulate economic growth outside of London.

Neil Bennett, partner at architecture panel Farrells, said the government should adapt its plans for HS2 to provide a bigger boost for regional cities.

He suggested the government should build phase two in the north before phase one in the south and argued the routes should terminate in at least one additional location in the south other than London.

He also criticised the proposal that HS2 stops at Meadowhall shopping centre outside Sheffield rather than in the city centre, arguing it would be “the death of Sheffield city centre”.

He said: “The [Sheffield] decision has been taken for rail reasons alone. That’s not a joined up solution at all. They don’t seem to have considered the social or environmental impact.”

Peter Madden, chief executive of Forum for the Future, said UK cities don’t have the powers to deliver integrated sustainable development and called on government to transfer powers to enable them to do this.