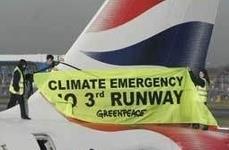 The government has confirmed plans for Heathrow's third runway.

Transport secretary Geoff Hoon told parliament today that the £40bn plan would go ahead as planned. Included in the proposal is £6bn decongestion plan and £10bn to be spent on railways over the next 10 years.

To appease environmental groups opposed to the airport expansion the government has created High Speed 2, a new company which will create the Heathrow international hub station and provide a high-speed rail network, whose main aim will be to improve links between London and Scotland.

Geoff Hoon said Britain would not hit the EU 2010 carbon emissions target but promised to cut emissions by 80% by 2050.

The plan will also increase passenger capacity on the Picadilly line and Crossrail, making 6,000 more people per hour able to travel to the airport on public transport. Flights at Heathrow could increase by 222,000 by 2030.

Hoon said that only the cleanest aircraft would be available for use on the third runway. He said: “Doing nothing will damage our economy and have no effect whatsoever on climate change.”

He also proposed the investment of £250m on commercial low-carbon emission vehicles and told parliament that Britain had the toughest climate change agenda in the world.

The London Assembly is staunchly against the expansion. Darren Johnson, chair of the London Assembly environment committee, said: “We remain unconvinced that the expansion of Heathrow is essential to the well-being of London and the wider UK economy. London's government is against the Heathrow expansion - I find it hard to believe how the central government can justify its decision."