Hello world, we are Nokia 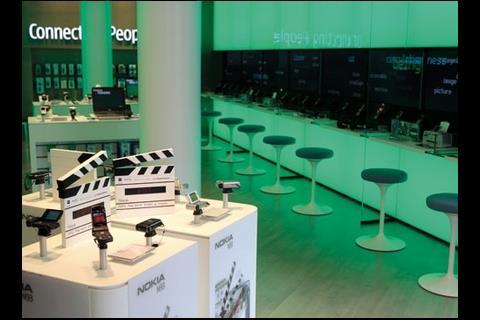 Being inside one of Nokia’s stores, anywhere in the world, is like being inside a mobile phone, lit by sexy LED lights and featuring the sleekest finishes and grooviest graphics known to man 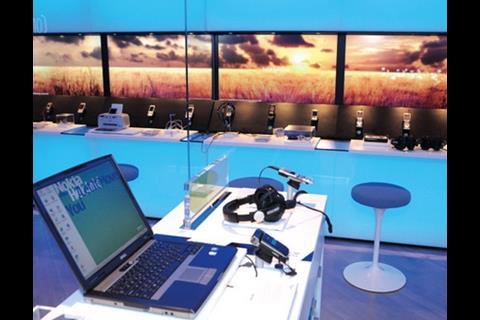 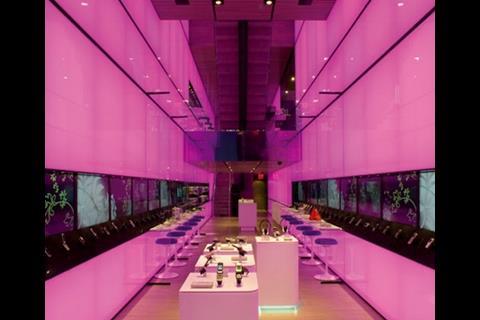 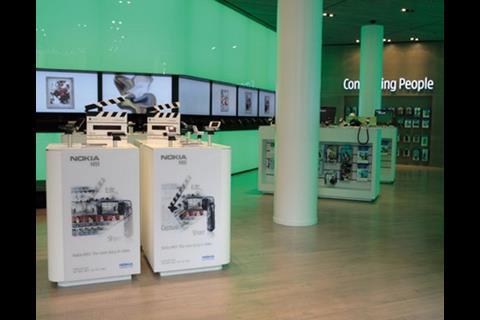 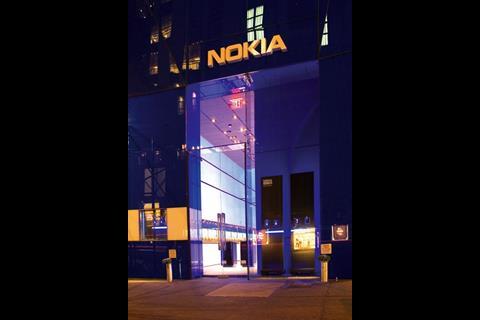 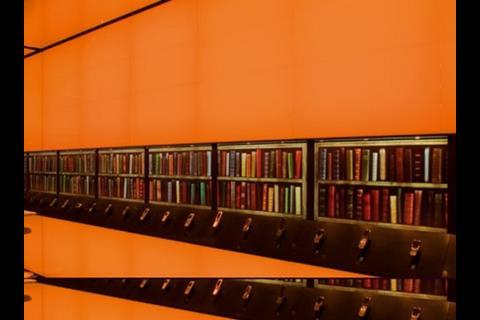 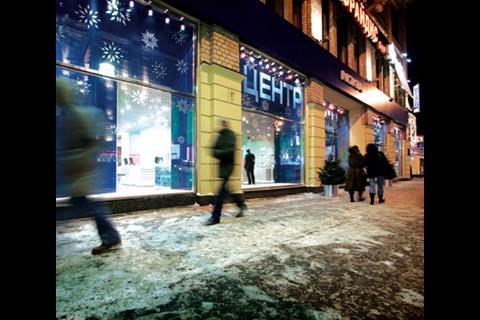 Nokia’s global network of high-tech outlets is about to hit London. Katie Puckett went to Finland to see if they really make the Apple store look like ‘Little House on the Prairie’

If you were asked to guess the trickiest part of fitting out one of Nokia’s new flagship stores, you might point at the wall-to-wall plasma screens or the hundreds of working phones hooked up to them. But according to Faithful + Gould (F+G), the project manager for the mobile phone company, it was the innocent-looking sheet of blue glass that sweeps around from the shop window up the entrance steps. The Helsinki shop has been open five months, but it’s only just gone in.

“It’s part of the structure, but we’ve had a huge problem with local contractors finding the right blue – this is the third one we’ve tried,” says Neil Clemson, a director at F+G, who is managing Nokia’s global stores programme. “They’ve always been tinted with green because of the heating process. At the Shanghai store we are going to need six storeys of glass for the facade.”

The blue is important because the stores are all about branding. Nokia doesn’t make mobiles anymore, it makes “devices” and it’s competing not only with traditional rivals like Motorola but with Apple’s iPhone. Device makers are fed up with taking a back seat to network operators such as Orange or Vodafone, who give away phones as an incentive to sign a contract, so they’re engaging with customers directly. “We take pride in our products – it’s hard for us to see them given away like bars of soap,” says Jeremy Wright, Nokia’s retail concept director. “Retail is becoming more and more important to us; it’s a showcase.”

Nokia plans to spend at least £60m on 18 flagship stores in cities across the globe, and increase its network of smaller franchise outlets from 300 to 1,000. The first Nokia store opened in Moscow in December 2005, and there are now a further five around the world.

Clemson and Wright are showing me around the latest, in Helsinki. It’s not an obvious site on a list that includes New York, Hong Kong, Mexico City, Chicago and (shortly) central London and Heathrow Terminal 5, but Nokia is Finnish and this is its home town.

The first things that hit you are the screens – a kaleidoscope of shifting content on every wall. Then there are the 130 devices. Pick one up and a screen flashes up a synopsis of its features. Each is fully functional – a far cry from the sticky plastic replicas in Carphone Warehouse. And, according to Clemson, a security nightmare. “You have to let people touch the real product,” says Clemson. “But you’ve got a very expensive product attached by a little wire. We spent two years developing the alarm system.”

Making the screens so integral to the look of the stores is also a gamble. As he points out, “if the content fails, you’ve got a very blank store”. But this is a ploy to make the design as adaptable as possible – mobile phones are the fastest moving market bar women’s fashion. Across the globe, content is piped in from an agency in Soho, and it can be changed at the click of a mouse, or altered instore to reflect local climate conditions or mood. Wright was involved in Nike’s concept stores, which were groundbreaking in the early nineties but tired-looking now. Nokia doesn’t want to suffer the same fate.

Mobile phones are also the subject of fierce competition. Wright and Clemson admit Nokia is following Apple, but they’re confident that they can topple it. We meet a few days after the iPhone was launched, and they’ve just spent a week in Lapland revving up their team.

“A couple of years ago, Apple stores were definitely leading the field,” says Wright, “but we’ve got much more technology than them. There was a great review in the New Yorker that described the Apple store as ‘Little House on the Prairie’ compared with ours in terms of technology. And by the way, our products are much better than the iPhone,” he smirks. Nokia’s London store will replace Dickins & Jones on Regent’s Street, “directly opposite Apple”. So you’ll be in their faces? “Absolutely. And we will be big and blue.”

Of Sony’s new flagship in west London, Clemson says archly: “It’s nice to see them taking reference from us.” Wright chips in: “There’s opening and there’s opening.” “Yeah, if you want to open in Knightsbridge, fine, but Oxford Circus takes a bit longer. We spent a year convincing Crown Estate that we weren’t just another Carphone Warehouse.” In the end, they flew their landlords to Helsinki to visit a prototype store in the woods. “We pulled it apart two or three times and we had all the Nokia staff flowing through, giving us their opinions. We’ve probably done more testing than anyone else on the high street.” It went down well with the landlord. “As soon as he walked in, he said: ‘Yes, we want one of those.’ We were surprised with the reaction of the planners. We expected them to say: ‘This is ridiculous, you can’t do that,’ but it was so different that they got excited.”

If the Nokia stores are reminiscent of Apple’s gleaming glass, it may be because they’ve employed the same designer – San Francisco’s Eight Inc. They’ve also specified that the stores have a Scandinavian feel with lots of timber to challenge the misconception that Nokia is Japanese or Korean.

F+G is project managing the entire programme with a team of 20-odd people across 15 offices. It’s a punishing schedule – in 2007, it will open 500 stores in Europe and China alone, and 100 in the Asia-Pacific, almost two a day.

A fit-out takes 20 weeks from possession to opening, with two weeks to install the technical kit including about 25km of wiring. The work is packaged up – a local contractor is brought in to complete the basic box, then anything with a “failure factor”, such as audiovisual equipment, technical shopfitting, or the LED displays, is carried out by a specialist. “A functional failure would be an absolute disaster,” says Clemson. For the London store, F+G is doing detailed design work with Dalziel & Pow, and will be tendering for fit-out contractors over the next few months. Contractors who fancy a go at matching that elusive shade of blue should get in touch.

Hopefully they should do better than their Russian colleagues. Clemson says that in Moscow, “we had problems with the quality standards. We had a local project manager on the job, and the European project manager babysitting it with him, and between them they forced it through.

“Many were sceptical about the live phones. The managers of all the other phone stores were like: ‘This is great, now all the thieves will go to your store instead of ours’.” But the store brought in more than £10m in its first year and only three phones were stolen. “The fact that they have burly guards probably has something to do with it,” he adds.

With a store that’s all about the brand, you wouldn’t expect to make many sales – the stores make excellent crèches for bored husbands out with their wives. But in fact, the chain has a respectable 6-10% conversion rate – Wright says Niketown’s was 10-12% but the goods were much lower value. In Moscow, it’s as high as 12-13% and newly minted Muscovites are prepared to spend a startling amount on the bling Vertu range of “instruments for personal communication”, which come in ostrich leather, platinum or diamond, and cost between £3,500 and £230,000. “They love it,” marvels Wright. “They turn up with carrier bags of money.”

What about the environment?

The Nokia stores use an awful lot of energy, but Jeremy Wright of Nokia says the environment is one of his client’s top priorities over the coming year.

“People tend to replace their phones every two years and the store has to reflect how fast the market changes, but there’s an enormous amount of ecological waste in doing that. So being able to change the AV content through the screens and all the visual merchandising is incredibly efficient and incredibly green as well because there’s not masses of cardboard and display units being chucked away every two or three weeks.

“At Nike you have the World Cup and all the new display units that come in with that, but we don’t have that problem. We can put a whole new range of product on the shelves with fairly minimal adjustment to the store.

The stores do take a reasonable amount of electricity, but all the lighting is LED, like in a mobile phone, which has a low energy consumption. Being a northern European company, there’s a lot of wood in the designs, and lots of replaceable materials. We’ll be looking at our working practices as well – there’s a lot of flying and shipping involved.

Standards vary from place to place. It’s highly regulated in California; in the UK it’s very important, but some of the countries we’re working in couldn’t care less.”

An archive of Building client articles can be accessed at www.building.co.uk/clients