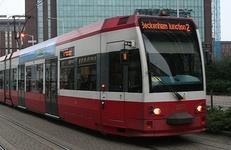 Tram line will stretch 8km into city of Zaragoza in Spain

Hill International is to project manage the construction of a Euro190m (£164m) tramline in Zaragoza, Spain. The four-year contract has an estimated value to its Spanish subsidiary Gerens Hill of around €1.9m.

The tram line will be 12.8 kilometers (8 miles) long with 25 stops and have a central stretch in the heart of the City of Zaragoza.