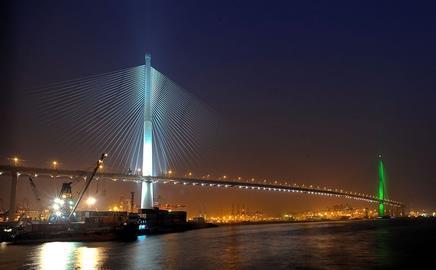 The world’s second longest spanning cable-stayed bridge has opened in Hong Kong, with its central section exceeding a kilometre in length.

Its central section is only bettered by the Sutong Bridge in China that crosses the Yangtze.

The bridge is supported by two 290m tall towers constructed using stainless steel and concrete, and they hold in place the 53m wide deck that carries three lanes of traffic in each direction.

The bridge has been reported as costing £226m. It was opened to traffic on 20 December.

Stonecutters Bridge stands at the entrance to the Kwai Chung container terminals. With a clearance of 73.5m, cargo ships can comfortably pass underneath.

Arup consulted and supervised on the project, and their East Asia chairman LM Lui described the difficulty of the project: “The most challenging part is the coordination between the various elements of the bridge.

“All parts have to fit together, which means close co-ordination between the temporary and permanent works and between on-site and off-site construction.”

The route will improve access between the International Airport and the urban areas of West Kowloon, as well as providing better links to the busy container port.