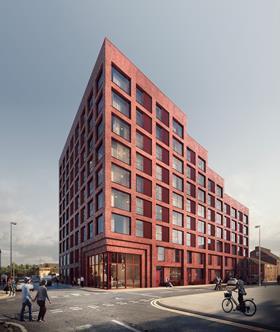 The developer behind Make’s plans to revamp the grade II*-listed Hornsey Town Hall in north London has brought in Hawkins\Brown for a residential scheme in Manchester.

Far East Consortium, which is listed on the Hong Kong stock exchange and has its main UK office in London’s Mayfair, is looking to build 80 homes (pictured) on a site currently being used as a car park in the New Cross neighbourhood of the city. It will also include a roof terrace.

The developer’s project director Hilary Brett said: “We have received many offers to sell the site for different uses, however we have decided we wanted to bring forward the site ourselves aimed at the local, residential market.”

Far East Consortium recently appointed Ardmore to the £30m deal to overhaul the art deco Hornsey Town Hall, which dates from 1935, and which will include building more than 130 apartments at the Crouch End landmark.