The NHS trust behind the West Midlands hospital left in the lurch when Carillion collapsed has promised it will play hardball with Balfour Beatty to ensure it gets value for money as it pushes for a deal to complete the project.

The Sandwell and West Birmingham Hospitals NHS trust has said it was prepared to hold the country’s biggest contractor to account – even though Balfour is the sole bidder left in the running to complete the Midland Metropolitan Hospital. 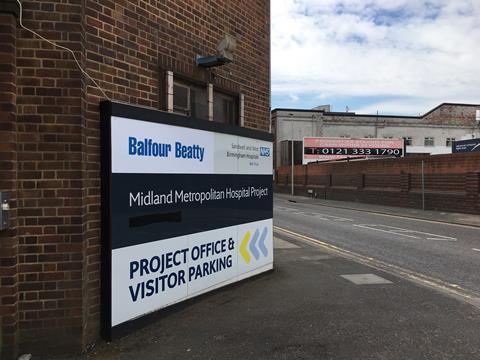 A spokesperson for the trust said: "We have a number of safeguards in place to ensure that, with a single bidder at this stage, we continue to receive value for money and the right standards of quality progressing through to final contract award.

"We recognise the clear expectation Balfour have of the trust and government for a decision in July on their status and are working to deliver that timetable."

She said the procurement process to get the Midland Met finished was "progressing to plan".

"The early works contract remains on track. We expect to receive a final contractor bid from Balfour Beatty, as a single bidder, against our specification for quality, price, risk and time that will be incorporated into the preferred bidder final business case that will need government approval in June," she said.

The contractor has been the favourite to take on the job since it signed on to carry out a £13m early works contract last November.