The majority of the biggest housing associations in London are planning to cut the number of homes they build, raising questions over whether the government can meet its target to build 150,000 homes.

A survey of the chief executives of the G15 group of London social landlords found that 11 of them were planning to reduce the number of homes they build, with six of them planning to cut output by half or more.

The G15 survey, carried out by the organisation itself, was conducted after the prospectus for the new funding regime was published. It follows growing concern that the plan to allow landlords to raise rents to 80% of the market price to fund new homes may put homes beyond the reach of many tenants.

Brendan Sarsfield, chief executive of G15 member Family Mosaic, said: “The government shouldn’t underestimate our ambition to build, but this model makes it very difficult for us.”

David Montague, chief executive of another G15 member, L&Q, who has been at the forefront of promoting the new model, said that without major change, L&Q also will have to reduce the number of homes built. He said: “Despite our commitment to this model, the way things are it will result in fewer homes.”

G15 members build the majority of the 13,000 affordable homes that are built in the capital. Funding for affordable housing was slashed by more than half in the spending review.

The survey by Constructionline also found that 36% of public sector clients are asking contractors to cut prices, with one in 10 asking for rebates on work already done.

Clients are also re-tendering work and increasingly joining frameworks in order to help bring costs down. 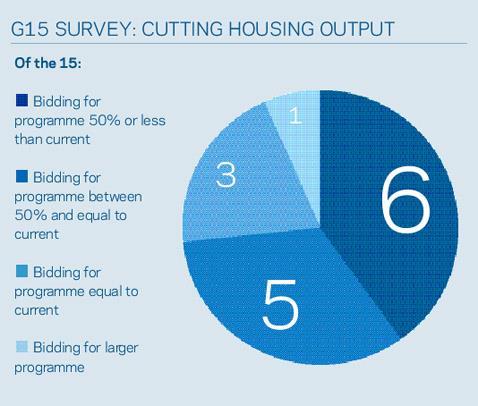