HS2 has had to fork out almost £50m to guard its construction sites against protestors.

Last week, HS2 protestors made headlines when activists staging an underground protest at Euston in central London were forced out of tunnels. 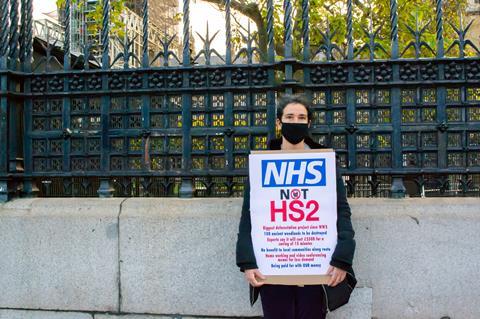 HS2 Rebellion, who are camped out at Euston Square Gardens, had a team that tunnelled underground to avoid being evicted from the site.

The cost of dealing with the most recent protests has not been factored into the latest bill for dealing with protestors, the minister in charge of the project admitted.

Andrew Stephenson told MPs: “Due to the levels of protestor activity experienced, an additional £49m of security costs across the HS2 project has been expended up to December 2020.”

He added: “The impact to the schedule of trespassers and in some cases concerted vandalism has not yet been fully assessed but we expect this to be within the overall estimated cost range of the project.”

It is not the first time the costs of dealing with protestors has been put in the spotlight, with HS2 bosses last year saying that the disruption to the railway’s construction programme had left them with a bill so large that they could have paid to build a primary school.

Minutes from an HS2 board meeting last May revealed protests by activists from campaign groups including Extinction Rebellion and HS2 Rebellion over the impact the railway would have on ancient woodlands and countryside have caused havoc to works on the project.