Infrastructure lobby groups have slammed the National Infrastructure Commission for curtailing the eastern section HS2, saying its proposals would be “be deeply damaging to the North and the Midlands”.

Yesterday, the NIC suggested the government should push ahead with the western side of the railway to Manchester, but that it could halt the eastern side to Leeds or build it in phases to save money and to prioritise regional rail links.

Midlands Connect, Connecting Britain and Transport for the North have all come out against the report, urging the government to commit to funding and building the project in full.

A National Infrastructure Commission (NIC) report said a phased approach could accelerate the eastern section from Birmingham to East Midlands Parkway, which would improve connectivity with Nottingham, but that regional rail links might be better options for routes to Sheffield and Leeds. 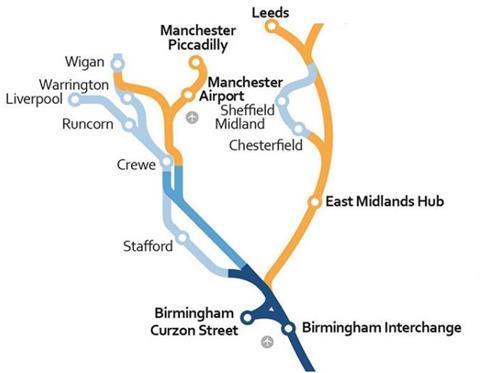 Simon Statham, Midlands Connect, head of technical programmes told Building that it seemed unfair that it was a case of either regional or inter-regional links.

He said: “We would have like to have seen a blended package between what they have termed regional options and long-distance options. It should be a mix between the two, not one or the other.

“The original idea of the Y network is incredibly important as we have built all our pan-region connections on that. We will have to go back 10 years in our planning if that is abandoned.”

Connecting Britain, a coalition of business and political leaders advocating the North, the Midlands and UK Plc need the eastern leg of HS2, said: “Let us be clear: the alternative options to delivering HS2 in full put forward by the NIC would be deeply damaging to the North and the Midlands, and would seriously damage attempts to close the divide between London and the South East and the rest of England

“We call on government in the strongest terms to reject these substandard proposals and stick to the public commitment made by the prime minister earlier this year to build HS2 all the way to Leeds and Manchester.”

Barry White, chief executive at Transport for the North, welcomed the report in part, saying it ”recognised the desperate need to better connect the North’s towns and cities” but he too was critical of not taking the railway to Leeds.

He said: “In all the NIC scenarios this would fall short of the full stated ambition of Northern leaders. That such investment in our rail network would also come at the expense of HS2’s long-awaited arrival to Yorkshire is a bitter blow and one we oppose.

“The NIC was tasked with integrating these projects – not pitching them against each other.”