Last month, a tribunal forced the £100bn railway to disclose unredacted documents assessing the risk to local water supplies posed by tunnelling works for the project’s 16km tunnels beneath the Chiltern Hills.

The documents revealed that six public water sources may need extra treatment works and others may need to close entirely during construction of the tunnels because of the risk of chalk dust contaminating supplies of drinking water.

Senior HS2 Ltd project manager Mark Clapp said that the tunnelling works, much of which will run under the water table, would inevitably disrupt the region’s chalk but said that there was a “a lot of science” on the digging operations to stop this contaminating the water supply.

He said: “If you were to ask, ‘is there any disturbance to the chalk in this area’, then the answer has to be yes. We’re drilling through. 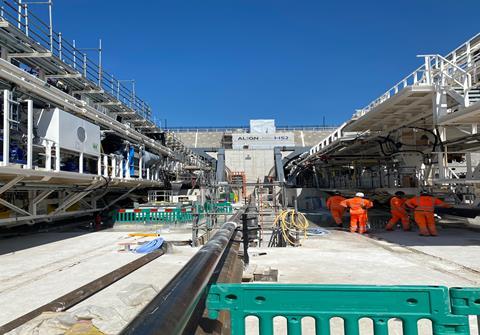 He added that there was also “real nervousness” on the part of one local water supplier, Affinity Water, and the Environment Agency, about the project’s 2,000 tonne tunnelling machines “losing cubes of material into an area which frankly they are not used to encountering”.

Asked how confident he was with the ground conditions over the 16km course of the tunnels, Clapp admitted that tunnelling would “come with risks” and added that ground investigation teams had found around 50 fault lines along the route.

He said that in a number of places material had “literally washed away”, leaving holes in the ground, and that even on the tunnel entrance site there had been a “significant challenge” with dissolution features, where acidic water dissolves the underlying chalk and leaves areas of loose soil.

This will be countered by a device at the front of the two 170m-long tunnel boring machines, called variable density machines, which will pump quick-drying mud into any voids found in the rock during tunnelling to act as a seal to prevent material leaking into the ground, Clapp said.

The mud, a mix of mined chalk, water and additives used to speed up the setting process, would then “freeze” around the machines within 15 minutes.

Clapp said the technique would mean there was “less chance of material moving into fractured chalk” and added that the view is that the material would not continue to permeate into the surrounding ground.

Chalk, which underlies large swathes of southern England, is a soft and highly porous form of limestone composed mostly of the microscopic shells of ancient plankton.

A spokesperson for Affinity Water previously said that it had taken “significant steps” to protect the water sources from harm.Last week, Peter Miller, HS2’s environment director, said: ”People living near the route can be reassured that HS2 Ltd is working very closely with the Environment Agency and the local water company to ensure their water is safe and in good supply.”

The work to build both the Chiltern tunnels and the 3.4km long Colne Valley viaduct is being carried out by Align, a joint venture between Bouygues, Sir Robert McAlpine and VolkerFitzPatrick.

The first tunnel boring machine, named Florence, was launched last month with the second machine, known as Cecilia, due to be launched before the end of June.