HS2 is looking for a single partner to manage construction of phase 2a – extending the rail route from the West Midlands to Crewe.

While the railway let two-part design and build contracts for much of the phase 1 civils work, HS2 has suggested it will employ more of the supply chain directly for phase 2a.

It will kick-start its hunt for a “design and delivery partner” in spring next year, Building understands, with a contract worth between £300m and £500m likely to be signed in 2021.

The construction manager will be responsible for design, systems integration and logistics and commissioning along the railway– as well as managing main works contractors.

HS2 is currently planning to split civils work for phase 2a, which does not have any stations, into seven packages – although procurement for these jobs is expected to begin after a deliver partner has been appointed.

Although none of the packages yet have prices, they are understood to have a collective value of around £3bn – with the whole of phase 2a predicted to cost between £3.6bn to £4bn.

In a notice posted to the Official Journal, HS2 said there were “differing procurement routes and commercial terms being anticipated in each” of the seven packages.

Civils work for phase 2b will include 2.5km of bored tunnel and 7km of viaducts, alongside 42 structures and one rail head.

The £88bn rail scheme is currently subject to a review led by former chairman Doug Oakervee on behalf of the government, which has vowed to decide on the scheme’s future by the end of the year.

But for now, HS2 is operating on the assumption it will go ahead – including hosting an industry day on 8 October to outline its procurement strategy for phase 2a.

Firms wanting to attend the event, which will be held in central Birmingham, can sign up here. 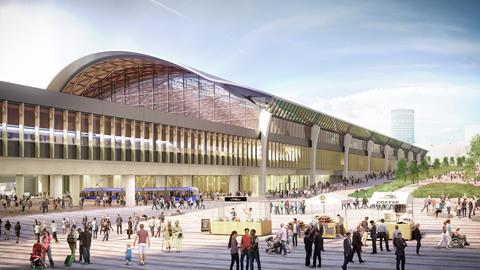 An image of the proposed new Curzon Street station in Birmingham