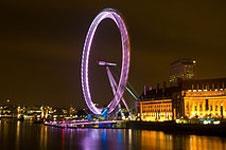 Four hundred London Eye passengers were trapped mid-air for over an hour on Monday evening due to a technical fault. Operators noticed a problem with one of the four tyres which turn the wheel and engineers halted the Eye mid-cycle to remove the tyre.

The tourists were stranded up to 450ft above the ground and were directed to emergency supplies by staff via an intercom system. The supplies, which were stored within the frames of the capsules, included water and blankets.

When the Eye resumed operations and the passengers were able to disembark, they were offered a hot drink and a refund. One passenger, Samantha Shearman, described the incident as a “horrible experience”. She said that when the sightseers alighted from the pods, staff panicked the passengers and this led to a stampede.

Operators have said that full safety checks were carried out following the emergency repairs. The London Eye was operating as normal yesterday.

It is not the first time that Britain’s most popular paid-for tourist attraction has encountered technical problems. It was closed in July 2000 after a tyre was shredded and fell into the Thames. In March 2002 it was shut for several hours over concerns that it was rotating too fast. The London Eye receives more than 3.5 million visitors a year.