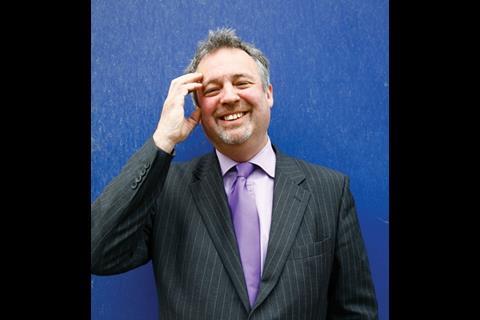 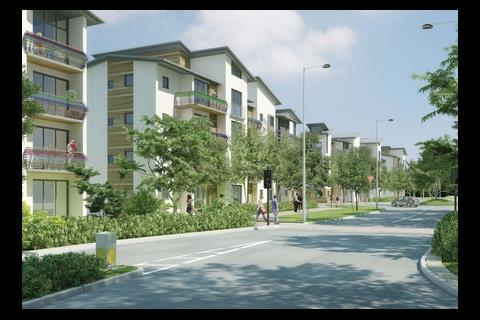 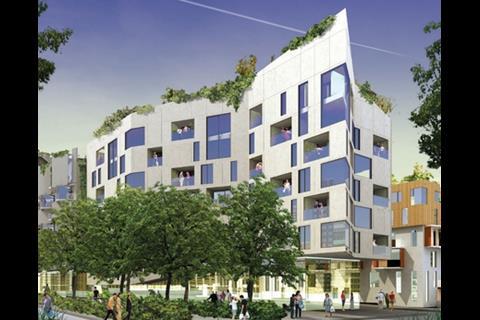 The 650-home West End Phase One in Milton Keynes.

Meet David Cowans, a man who has turned a standard-issue housing association into a vehicle for exploring concepts for which words have yet to be invented.

Here’s a riddle: what do you call an employee whom many would consider to be in the public sector, yet who runs a private business with billions of pounds of assets? Who works to improve the lives of the poorest people, yet earns £100,000 more than the prime minister? Yes, it must be the chief executive of a housing association, an organisation that contains many contradictions. It is a for-profit charity that is both property manager and developer, and which exists in the public and private sector. And these days it is no longer the development backwater that the construction industry tends to assume it is: the most forward-thinking social landlords are holding their own against housebuilders, engaging in landbanking and expanding into building homes for private sale.

No association illustrates the peculiarities of this new breed of social landlord better than Places for People (PfP) and its chief executive, David Cowans. This year will mark the 10th year of Cowans’ tenure at the association, a period in which he has turned it from North British Housing, a regional landlord specialising in homes for affordable rent, into a national player managing more than 60,000 units.

And he has been no stranger to controversy in that time: an argument among the board members led to supervision by the social housing regulator in 2003, and the sector has struggled to come to terms with what many see as his fat-cat £258,000 salary.

The changes continue apace, though. Next year, for the first time ever, the group will build more homes for private sale than for affordable rent, and by 2016 the organisation aims to build 5,000 homes a year, a similar size development programme to, say, Barratt before it bought Wilson Bowden. So RSLs are no longer an insignificant player. But this entrepreneurialism brings its own risks: with the market facing its first downturn in years, do associations like his have the experience and training to deal with the market?

In person, Cowans appears classic chief executive material. A lively, quick-fire Geordie, he is big on vision and plans and inspiration, but harder to pin down on detail. As Paul Hackett, a former adviser to John Prescott, says: “He’s very hands-off. You either like him or you don’t.” Either way, you cannot fault him on his language. He has been reading a book on the overuse of clichés, entitled It’s Not Rocket Science. “I must get out of the habit,” he confesses, after telling me the continuing demand for housing was a no-brainer. “They just slip out – it’s a curse.”

Before moving to what was then North British Housing, Cowans was director of housing at Birmingham council. It was there, he says, that he noticed that housing and regeneration development was fragmented into firms dealing with affordable rented homes, market renting or private sale. His vision for PfP was for it to be an all-round neighbourhood management company, whether you wanted social housing, private housing or private rent or a mixture of all three. The change, he says, is so profound that he does not even refer to PfP as a housing association: “I don’t have the language for what we are any more. I don’t think anything that’s happened in the past has any relevance to now because it’s all moved on so fast.”

What this means is taking a traditional social housing organisation and extending it outwards in a bewildering array of initiatives and joint ventures. He has teamed up with the Co-Operative Bank to offer cheap loans to financially disadvantaged PfP customers (so far, £1.1m has been handed out). He has formed the Making Places joint venture with brownfield specialist Cofton, which has a £300m landbank for private development.

The first fruit of this collaboration is the 2,500-home Brooklands development in Milton Keynes, and this shows what his vision means in practice. Here PfP will build the homes for rent and affordable sale, as well as the commercial properties and 30% of the homes for private sale. Other developers will be brought in to handle other parts of the site, and even self-builders are welcome. All, he insists, will have to accept a PfP management agreement on the entire site, which Cowans says is a way of ensuring that the site stays desirable and valuable. “What you tend to see is that nobody’s got overall management of the thing. In this place it’ll be very straightforward – it’ll be us,” he says. Then, suddenly taking over my job, he continues: “Does that give us a marketing position to trade on to people who want additional services who live in that place? Well, of course it does.”

Clearly his ambition does not end with Making Places. His latest bugbear is schools. Why, he asks, should a developer not be able to have some control over the thing that has the single largest impact on the value of their development – the quality and reputation of the local school. He says he is investigating how PfP might set up joint ventures to involve itself in schools, either by partnering with a local council to ensure the school is commissioned “properly”, or working with a construction partner to actually build the school itself.

“At the moment I’m the developer and I give the state £7m to build a school – but it doesn’t guarantee it’s going to be a good one,” he says. “We’re in the early foothills of working out how we can influence the quality of the school.”

Then there is the green agenda. Cowans says PfP is also on the way to sealing a deal with a major contractor and supplier for a construction and development joint venture that would give the company the scale to be able to afford to build zero-carbon homes. Once again, Cowans usurps the role of interviewer to explain. “Is there a synergy between an organisation like ours with land development aspirations, a construction company, in the pure contracting way, and maybe a supply chain supplier? Well, the answer would be yes, and we’re having several conversations along those lines.”

He will not, for the moment at least, be drawn on the details, but from the smile on his face it looks as though he thinks the deal will come off. He clearly sees the joint ventures as essential to the group’s future, and he takes pride in his organisation’s role in them: “We’re easy to work with, we’re a good client. Very focused, very commercial and not dogmatic – it’s what works.”

All of this, of course, is a long way from the traditional RSL. But the commercial route brings risks, too. Although traditional RSLs do very well out of recessions, Cowans accepts that the housing market downturn will challenge PfP. He insists, though, that it is better placed than most housebuilders to weather the storm because its structure and funding allow it to simply rent its homes if there are fewer buyers. Housebuilders, which do not usually have property management businesses and usually do have more expensive borrowing to service, cannot afford to take a long-term view.

Cowans is adamant that PfP has reviewed all of its developments and will not put any on hold because of the credit crunch. “Not at the moment, largely because of the way we’re constructed,” he says. “We might take a whole scheme in-house for market rent – it’s very good business for us. There’s no problem with market demand for housing, just people’s ability to pay for it. The truth is, people have got to live somewhere.”

Longer term, though, he accepts there is an issue with funding his business. His most recent brush with controversy was when it was revealed that PfP had considered floating on the stock exchange – a story he insists was misunderstood and misinterpreted. He is unashamed, though, about the need for a debate on how to fund the expansion of RSLs. Current rules do not allow associations to accept equity funding, but Cowans says this needs to change. Indeed, he wants the proposed Homes and Communities Agency, to be formed from the Housing Corporation and English Partnerships, to fund the construction of housing by equity investment rather than grant. “The whole flotation thing – people latched on to an exciting headline and missed the whole point of the debate which is, how do you get additional finance in to increase your output.”

This may seem straightforward to those outside the housing association movement, but there is no underestimating how radical it looks to a sector largely made up of registered charities. But for Cowans this constant pushing goes with the territory. Has he achieved enough in 10 years? “Oh, you can’t ask me that!” he says. “The answer’s always going to be no.” So are you going to see it through for the next 10? He does not seem sure at first. “I get the calls,” he says after a pause, “but where else could you do stuff like this?”

1994-97 Director of housing at Birmingham council

1997 Chief executive of Places for People