The table shows the pre-tax profit, including exceptional items, of contractors that have released their yearly accounts to 31 December 2010, divided by the annual pay of the chief executive or highest paid director.

Tyler, who won chief executive of the year at last month’s Building Awards, saw his pay near £1m but steered Balfour to £187m in pre-tax profits.

One analyst, who did not want to be named, said that while large, Tyler’s pay packet was not excessive compared with other sectors and executive pay had still increased across the construction sector this year.

“For a FTSE 100 company, Tyler doesn’t get paid aggressively. It’s not comparable to the luxurious pay seen in the banking sector,” he said.

“Bonuses have returned in the context of a recovery. But they have been affected not just by profitability but by other, more qualitative things, like resolving rights issues. It’s debatable whether they should get one for something like that,” he said.

Greg Fitzgerald, chief executive of Galliford Try, finished bottom of the list largely due to the firm’s relatively low profit figures of £19.2m for 2010.

Robin Hardy, an analyst at Peel Hunt, said this could well change next year as Galliford Try’s profitability is expected to increase after it completes its transition from majority contractor to majority housebuilder.

Hardy explained that many of the bonus structures set during the recession had been made during heavy losses and so were not based on profitability.

“When you have been coming out of a fallow period, the criteria are peculiar and not linked to pre-tax profit. Instead they are often linked to avoiding various pitfalls,” he said. 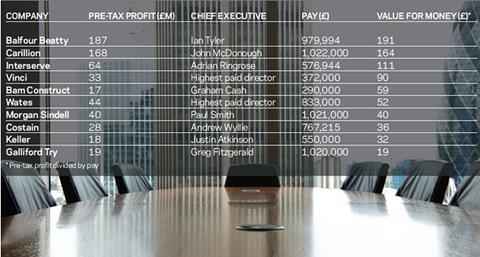