Danish practice 3XN has released images of what the new headquarters of the International Olympic Committee will look like.

The firm, best known in the UK for its work on the Museum of Liverpool and then being ditched by the client before it was completed, won an international competition for the new building at Lausanne in Switzerland – the IOC’s current home. 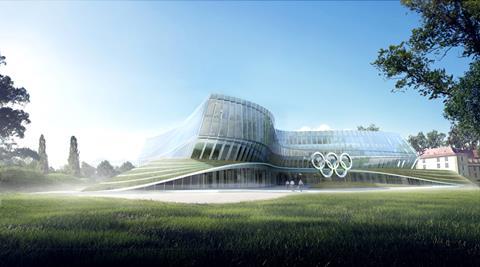 More than 100 firms applied for the scheme with a final shortlist of 12 chosen. Among the practices beaten earlier this year were Amanda Levete’s practice AL_A, Farshid Moussavi Architecture, OMA and US firm Diller Scofidio.

The 24,000sq m building will bring the IOC’s 600 employees, who currently work in five different sites across the city, under one roof.

In 2012, the IOC was forced to temporarily close its headquarters and relocate staff after a burst water pipe caused extensive flooding, leading to damage to archives.

This all led to the consideration of an alternative headquarters being raised for the first time last year.

Some buildings on the current IOC headquarters site, including a multi-function centre built only in 2005, could be demolished but the main office of the IOC, the Château de Vidy, will stay after being officially recognised as a historical monument since 1971.