In depth: What the National Infrastructure Strategy means for construction

The government has today published its National Infrastructure Strategy – more than two years after the assessment it was based on was first published.

The strategy has laid out several key infrastructure plans and promises as part of the new announcement.

Take a look at the key announcements and takeaways from the National Infrastructure Strategy.

The new facility, which will be headquartered in the north of England, will come into operation from this coming spring. Given the end of the UK’s transition period to its exit with the EU, there had been concerns around whether the UK would still have access to the European Infrastructure Bank, which has helped bankroll a huge number of UK infrastructure projects. The UK version has been set up to help meet that need.

The bank will co-invest alongside private sector investors including banks, institutional investors, sovereign wealth funds, pension funds and global infrastructure investors. It will use a range of tools to support private projects: as well as offering guarantees through the existing UK guarantees scheme, it will be able to offer debt, equity and hybrid products.

The National Infrastructure Strategy revealed when several key policy announcements are set to be made. The Construction Playbook, Union Connectivity Review, Integrated Rail Plan, which will outline the future of HS2 north and Northern Powerhouse Rail and the Energy White Paper will be published in the next three months.

The net zero review final report, the national infrastructure and construction pipeline, transforming infrastructure performance 2021, and a transport decarbonisation plan will be published in the next six months.

In the next 12 months, the government has also promised to announce the English devolution and local recovery white paper, an electric vehicle charging infrastructure strategy, a heat and buildings strategy, a hydrogen strategy, an industrial decarbonisation strategy, and a refreshed industrial strategy.

The government set up Project Speed in the summer, to review every part of the infrastructure project life cycle and identify where improvements could be made. Project Speed has developed a comprehensive package of reforms, including:

It also cited the example of the A66 project, which will dual the six remaining sections of single carriageway across northern England between Scotch Corner and Penrith. The project was programmed to take over 15 years, including four more years of development and 10 years of construction. The Project Speed review identified ways to save up to 50% of time in the planned construction process, cutting this down from 10 to five years.

The National Infrastructure Strategy outlined a requirement that all infrastructure projects need to have a board level design champion in place by the end of 2021 at either the project, programme or organisational level, supported where appropriate by design panels.

Government recommits to finishing Crossrail - and suspending work on Crossrail 2

Earlier this month, TfL and the Department for Transport reached an agreement that saw the former handed £1.8bn to help it out of the financial blackhole caused by the covid-19 pandemic. But one of the conditions of the deal is that TfL starts winds up consultancy work on the £33bn Crossrail 2 project for the duration of the funding agreement.

This means that consultancy work on the scheme, which involves building a railway line linking south-west and north-east London, as well as towns across Surrey and Hertfordshire, would be halted until after 31 March 2021 at the earliest.

The strategy said: “The government is continuing to address capacity issues in the capital, by financing the completion of Crossrail, but has agreed that Transport for London will stop development on Crossrail 2. This frees up investment to raise the performance of public transport networks in the regional cities towards London’s gold standard.”

The government is urging local authorities to take steps to preserve construction jobs in their areas by progressing funded projects as soon as practicable. The strategy said given the construction sector’s role in the response to the pandemic had been integral to the country’s efforts and that it was imperative the sector continued to be supported.

A breakdown of who is responsible for infrastructure across Scotland, Wales and Northern Ireland 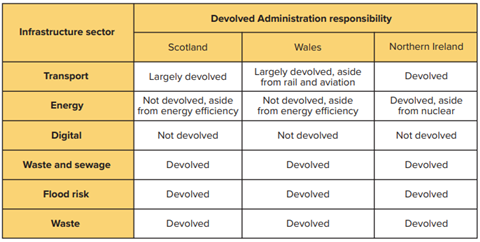 “Publication of the UK’s first ever National Infrastructure Strategy is an important moment, given the vital role infrastructure can play in supporting economic recovery and growth across the whole of UK, as well as tackling climate change. We are pleased to see the government’s strategy responds closely to our own independent assessment of the country’s infrastructure needs and how to address them.

“We are particularly pleased that government has accepted the commission’s proposal for an infrastructure investment bank, to help catalyse private investment.

“Alongside announcements in the spending review, the strategy represents a solid down payment on a long-term fiscal commitment to infrastructure.

“As government acknowledges, there are currently some missing pieces of the jigsaw when it comes to energy policy. The 10-point plan set out by the prime minister last week set out serious commitments in areas such as wind power, decarbonising heating, developing hydrogen and carbon capture and storage. We look forward to seeing detail on the delivery plans for achieving these targets in forthcoming announcements.

“We welcome reform of the treasury’s green book to assess investments against policy objectives. The proposed focus on investment in local infrastructure is welcome, as are intra-city budgets for mayors. However, to achieve the aim of levelling up, more long term funding and control for cities is necessary to bring transformational urban public transport projects to places outside London.

“The commission will monitor government’s progress on delivery and very much hope this strategy marks the beginning of a renewed focus on long term infrastructure policy around which industry and investors can plan with confidence.”