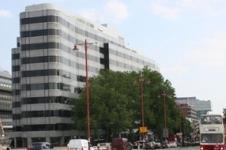 The location of iPhone users on Twitter can potentially be pinpointed by Google's new Street View software.

Photographs of the exact location of iPhone users can be seen on Street View because some Twitter software reveals location co-ordinates everytime a Tweet is sent.

Greg Morris' iPhone co-ordinates revealed on Twitter
Longitude and latitude can be shown because iPhone and other smartphones such as the Nokia N96 are GPS-enabled. When these co-ordinates are inputted into Google Street View they reveal a photograph of a user's current location.

The latest round of phone applications to take advantage of positional 'geotags' are those updating to Twitter.

Using applications such as Tapulous's Twinkle or Naan Studio's Twitterfon, Twitterers are sharing their exact whereabouts in real-time.

Twitter's popularity has exploded in recent months and is used by many well-known industry figures such as Tom Bloxham and Vaughan Burnand.

Google Street View was launched today in the UK and includes 3D photographic coverage of streets in Manchester, London and Belfast.

As well as capturing images of buildings and streets, the software also reveals the minutae of everday life. This has provoked concerns over privacy and Google has blurred out the face's of individuals captured by its camera cars.