Only half of independent British consultants managed to increase their turnover overseas in their last financial year despite attempts to reduce dependence on the stagnant UK market, according to analysis by Building.

Yet while this shows the industry is diversifying overseas, many increased the amount of business they are doing abroad simply because UK work has fallen faster than international.

However, only half of the UK consultants surveyed managed to increase their overseas turnover, despite global GDP growth of about 4% in 2010.

Graham Hand, chief executive of UK consultants’ organisation British Expertise, said that those firms failing to grow abroad could be at risk of “falling behind” as the UK construction economy stagnates.

“They are internationalising as fast as they can. This is from their analysis [of the UK market] which is fairly bleak.

“The UK market will remain flat or flattish for years to come. If these companies want to grow it has to be international growth,” he said.

However, he said he expected that overseas revenue would have increased significantly since the companies’ 2010 results were released.

Buro Happold saw the biggest swing to work overseas, but this was partly down to a fall in UK revenue of over 50%.

Capita Symonds also grew significantly overseas, but started from a low base of work outside the UK.

At the beginning of May, Mott MacDonald’s chairman, Keith Howells, said that five years ago 60% of the engineer’s revenue came from the UK, but now it was just a third.

EC Harris has said it plans to win three-quarters of its revenue from outside the UK in three years’ time. 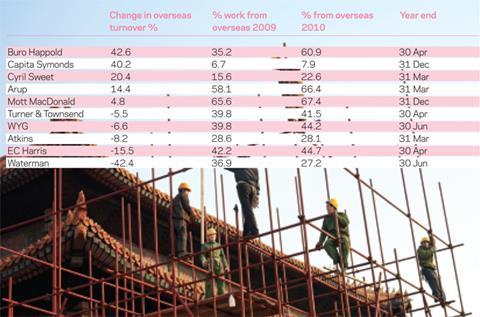