Deal is for bridge structures on A30 upgrade in Cornwall

Keltbray has won its first major highways contract since announcing it was targeting work in the roads sector last year.

The firm has signed a £14.1m deal for 14 bridge structures on an upgrade planned for the A30 in Cornwall. 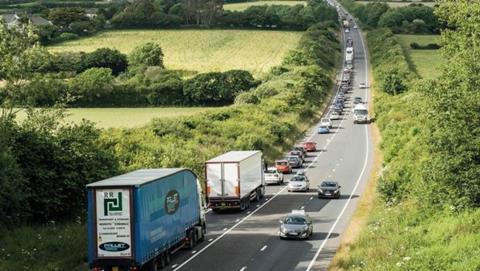 The scheme, which is being carried out by a team featuring Costain and Jacobs, involves building nearly 14km of dual carriageway between Chiverton Cross and Carland Cross.

Keltbray, which is set to release its 2020 results next month, said its work centres on modularisation and modern methods of construction “to identify and construct standard bridge elements to assure greater buildability and quality within the overall schedule”.

The firm’s chief executive Darren James added: “This project marks an important milestone in the delivery of our strategy to redefine the way sustainable development is delivered, where we foresee strong demand for Keltbray’s integrated capabilities in adjacent infrastructure sectors like highways.”

Keltbray has been diversifying its business away from its core London office market sector in recent years into areas such as rail and energy and has now begun the move into highways work where, according to its latest annual report, Highways England spent £4.5bn in 2019/20.

The firm’s experience of road jobs has been limited to enabling works as part of building schemes but it is looking to expand into the highways market using its existing structural and reinforced concrete experience.

The arrival of James at the beginning of last April from Costain, where he was chief operating officer, has prompted the move which is being spearheaded by another former Costain executive Tim Bowen, who was in charge of the firm’s roads business for eight years, before leaving four years ago. Bowen has been put in charge of Keltbray’s work on the A30.

The stretch of road between Chiverton and Carland Cross is the last remaining stretch of single-carriageway A30 between Camborne and the M5 - and is a notorious hotspot for delays, with motorists facing hours of sitting in traffic during the peak summer months.

The £290m upgrade for Highways England is due to run until the middle of 2023.

In its most recent set of accounts, Keltbray posted a record income of £563m in the year to October 2019 – although it has warned this figure will fall back for 2020.