Kier has been officially confirmed as the winner of a scheme to build part of Facebook’s headquarters in King’s Cross.

The win is an end of year tonic for the contractor which in the last few weeks has been forced into a rights issue to cope with its debt pile and was publicly outed as a poor payer at parliamentary inquiry in the autumn.

The 12-storey scheme has been designed by AHMM, the architect behind the original headquarters of Facebook’s US tech rival, Google, at King’s Cross. The AHMM scheme was eventually dropped in favour of team comprising Heatherwick Studio and BIG.

For the Facebook scheme, AHMM’s design will see offices run across nine floors while the building also includes a 600-seat theatre. 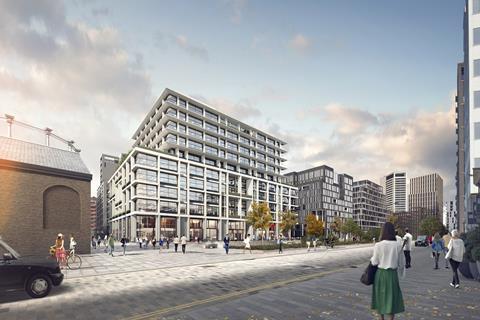 How the P2 scheme will look when finished

The ground floor on the south side will include retail to attract shoppers from the nearby Coal Drops Yard which was designed by Heatherwick Studio and completed by Bam in September.

King’s Cross developer Argent said work on P2 will be completed in 2021.

Kier is part of a framework of contractors that have carried out work at the redevelopment. As well as Bam, the list also included Carillion which went bust nearly a year ago.

Kier built the Duggan Morris-designed R7 building, sometimes known as the pink building because of its colour, which completed last year.