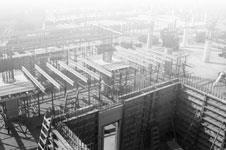 KPMG has warned that the global construction industry may be unrealistically upbeat about its future prospects. The warning came after the firm’s annual survey of construction firms worldwide found that 64% expected to increase or maintain profit by mid 2010. The research also found that 65% expected to make no redundancies over the next 12 months.

One of the report’s authors, Fiona McDermott, UK head of building and construction at KPMG, said: “The optimism appears to be down to the strength of order books; work in the pipeline has either increased or stayed the same. But many firms are working through order books built up before the recession. So I wonder if the full effect has yet to hit them and the worst may be yet to come.”

Survey respondents were also relatively positive about profit levels, with only 44% expecting earnings to fall in the year ahead. Contractors in Europe, the Middle East and Africa (EMEA) suffered greater dents in profits than firms in the Americas, the survey found. McDermott suggested this was due to the shorter lengths of contracts in EMEA.

She added that those contractors with the most globally diversified businesses would have the best chance of future success.

Graham Watts, chief executive of the Construction Industry Council, said the optimism of global firms was “probably not misplaced”, but highlighted the gap between the UK’s recovery prospects and the rest of the world. UK construction output is expected to continue to fall in 2010 and 2011, according to Experian.

He said: “There is a lag. Most heads of major firms I talk to feel there’s another two years of recession to go here and that’s borne out by official figures.”

Andrew Loudon, chief operating officer at Currie & Brown, said: “It just reinforces the fact you have to be in different global markets. There are signs of improvement in the Middle East and financial stimulus in the US.”