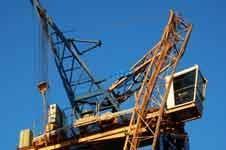 A construction labourer has been killed in New Delhi after a section of a crane fell on him at the site of the Commonwealth Games.

Shalender Singh, 28, from Punjab, was employed by Ahluwalia Contracts (India).

He was killed immediately when the lifting portion of the crane fell on his head.

A senior police officer said the crane lifter was going upwards when it suddenly broke down due to an apparent overload, falling onto Singh who was standing below.

News of the accident led to unrest among his fellow workers, who stopped work, demanding compensation for the family of the victim.

They vandalised the construction firm's temporary office, cars that were parked nearby, and an ambulance which arrived late to the scene.

A legal advisor for the company also suffered, after the crowd turned their attentions on him when he allegedly disowned Singh as an employee of the construction firm.

One worker told ThaiIndian News the men were working in “such risky conditions, that accidents could occur at any time,” and alleged that company officials had previously colluded with the police to bury other cases of accidents.

Police were called to deal with the situation.

The Commonwealth Games will be hosted by New Delhi in 2010.