Laing O’Rourke has been lined up for the second phase of a scheme to redevelop a stretch of land next to the US embassy at Nine Elms in south London.

Building understands the firm, which last week announced that its building boss Liam Cummins was leaving after 16 years at the business, has signed a pre-construction services agreement with Chinese developer R&F Properties for the deal, known as N6, at Nine Elms Square.

It is understood to be worth around £80m and involves building a 12-storey luxury residential scheme under a design and build deal.

In September, Mace won the first phase of work at the Nine Elms Square project which will see it build three towers for R&F under a management contract. 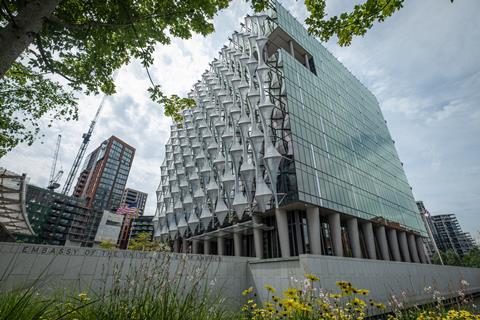 The new US embassy, built by Sir Robert McAlpine, has triggered a slew of building jobs in the Nine Elms area

Designed by US architect SOM, the three towers Mace is building will range from 36 to 54 storeys and will provide 880 apartments running across 11,555 sq m. SOM is also behind the second phase.

Nine Elms Square is being built next door to Multiplex’s One Nine Elms, which has been designed by another US architect, KPF, and involves two towers of 56 and 42 storeys. It has a construction value of more than £650m.

R&F is also developing the Queen’s Square site in Croydon, which includes the former Nestle building, after buying it from Delancey in spring 2017.