Leeds tower in for planning

A Leeds-based property developer has submitted plans for a 46-storey residential tower in the middle of the city which if built would see it eclipse the Bridgewater Place scheme completed 13 years ago by the then Bovis Lend Lease.

The scheme, designed by local practice Nick Brown Architects, called Two Springwell Gardens, would be built close to the city’s main railway station, also redeveloped by Bovis, and would be 142m tall.

Local developer Citylife said the job will have a gross development value of £175m. The firm added it will include more than 600 apartments along with 3,000 sq ft of commercial space.

Citylife is also behind the neighbouring 16-storey One Springwell Gardens development which includes more than 200 apartments and is due to finish in 2022.

Designed by Aedas, the 32-storey Bridgewater Place was finished in 2007 and is a mixture of offices and retail. The 112m building is the tallest building in Yorkshire. 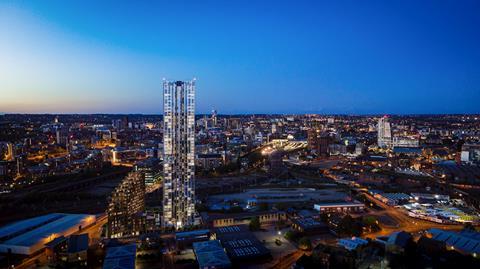 The tower will be taller than the city’s current record holder, the 32-storey Bridgewater Place scheme (pictured right)