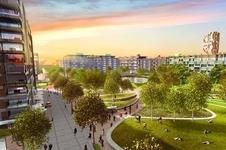 The government is likely to have to break into its Olympic contingency fund in order to bail out the developer of the Olympic village, according to a report from MPs.

The £9.3bn budget for the Games includes a £2.7bn contingency fund to cover potential cost increases.

Officials from the Olympic Delivery Authority (ODA) told the Public Accounts Committee (PAC) that it “could need to use the funders' group contingency” to meet costs associated with funding uncertainty over the Olympic village.

In a report out today, the PAC has said it is concerned about the ODA's failure to secure a deal with the preferred developer of the Olympic village, Lend Lease. The credit crisis has left the developer unable to obtain financing for the scheme, despite it being cut by more than 1,000 housing units.

The PAC said it has been told by the government that alternative sources of funding from the public sector are being looked at, particularly to cover the costs of the units destined to become affordable homes. The village is expected to cost at least £1bn to build.

In addition, the committee revealed that the government is still confident it will receive back the £675m of National Lottery contributions to the cost of the Games, even though its assumptions about the sale price of Olympic land after the Games have not been reassessed since the UK property downturn.

The report also said that the cost of construction for major 2012 venues, including the Olympic stadium, have been adversely affected by having too few contractors bidding for the work.

Edward Leigh, chair of the PAC, said: “We welcome the news that construction has begun and the programme is broadly on track. Far less good is that, despite our recommendations, arrangements to manage the whole programme and the associated risks are not yet in place.

“The rocky state of the financial and property markets has not helped efforts, so far unsuccessful, to reach a deal with the private sector to build the Olympic village, expected to cost more than £1bn. In the light of growing uncertainties, the department should keep an eagle eye on potential demands on the £1bn of contingency funds which have not yet been earmarked.”

An ODA spokesperson said: “We are in ongoing discussions over the financing of the Olympic village and expect to finalise this later in the year. It is possible, given the economic situation, that more public investment may be needed. However, this would be within the existing £9.325bn budget for the Games. We will obviously be working to minimise the degree to which this investment is required.”