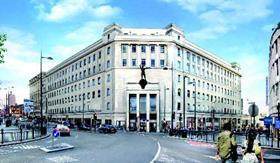 The contractor building the final phase of a £160m regeneration scheme in central Liverpool is set to go into liquidation, with 11 staff already made redundant.

Merepark Construction, the construction arm of developer Merepark, was working on the final phase of the regeneration of the iconic Lewis’ Building in Liverpool, after securing an initial £26m contract to refurbish the interior and exterior of the iconic Grade-II listed building.

However, according to a insolvency practitioner Begbies Traynor, due to the increasing scope of works the scheme was running 15% over-budget and the bank funding the project decided to cease payments to Merepark Construction’s subcontractors and suppliers, despite the project being 85% complete.

Merepark Construction was then forced to seek advice from Begbies Traynor on going into voluntary liquidation, with 11 staff made redundant.

Paul Barber, partner at Begbies Traynor, said: “Following the bank’s decision … the directors of Merepark Construction Ltd were left with no alternative than to seek advice as to the process of entering into creditors’ voluntary liquidation.

“All 11 of the company’s staff were made redundant with immediate effect.”

Merepark Construction’s work on the Lewis’ Building followed its completion of the first phase strip-out of the building, which took 34 weeks to complete and involved the removal of 3,429 tonnes of debris and asbestos from all nine floors.

The project is part of the final phase of the £160m Central Village scheme in Liverpool.