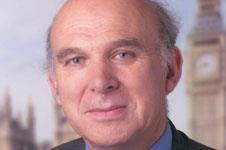 Vince Cable, the Liberal Democrat shadow chancellor, has called for a one-off windfall tax on energy firms for improvements to existing homes.

Cable, who was speaking at Think Tank, a sustainability event , said a levy on energy companies would need to be simple as the Inland Revenue was “on the edge of a nervous breakdown” and unable to cope with complex tax systems. He noted that energy firms had received £10bn of free carbon credits under the EU emissions carbon trading scheme.

He said that he would be pushing for lower VAT rates on improving existing homes. This would be paid for by a tax on new homes. He said: “That would be a big incentive for people to make improvements to existing dwellings.”

He also said that crown immunity on energy regulations ought to be scrapped. Think Tank is a sustainability debating forum hosted by organisers of sustainability event Think 08 and the UK Green Building Council. Seee video coverage of the event below. The event was sponsored by consultancy group Mott MacDonald.

For information about Think 08 visit www.think08.co.uk