London mayor to decide on revised plans for £1.5bn redevelopment of former brewery

Consultation on amended Mortlake proposals due to finish next month

Revised plans to turn one of Britain’s oldest breweries into a mixed-use development on a 200m stretch of the Thames have been submitted to the Mayor of London after the scheme was called in earlier this year.

The project, on the 9ha site of the Stag brewery in Mortlake, south-west London, had originally proposed a new high street, around 850 homes, which included a 150-home care village, 3,000 sq m of office space and a 1,200-pupil secondary school. 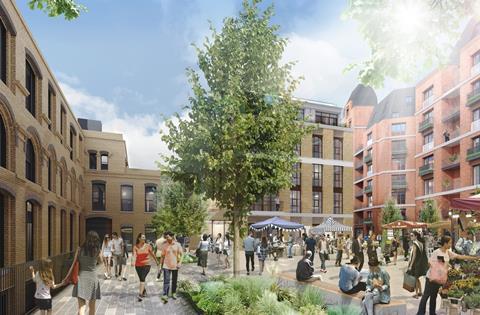 A decision on the scheme is due later this year

Beer is said to have been brewed on the site since 1487 when it was part of a monastery and later supplied British troops in India and the Crimea.

More recently it was owned by Watneys, which renamed it the Stag brewery, and then by global drinks giant ABInBev which produced Budweiser there. Production ceased in 2015 when it was sold for £158m to Reselton.

But the Singaporean developer was told in May the mayor wanted a second look at its plans drawn up by Squire & Partners after they were given the green light by Richmond council in January. Concerns centred on the amount of affordable housing and worries about road traffic measures.

The revised plans will see the number of homes go up to around 1,250 with around 30% being made available for affordable housing – up from the 17.5% originally proposed. A public consultation on the new proposals began last week and is due to finish on 20 September.

The increase brings the project closer into line with the GLA’s target for all new schemes to include at least 35% affordable housing, with a spokesperson for Reselton saying the 30% figure was agreed on condition that the work also includes a new secondary school.

The total area of the scheme has also grown by 15% with the increased number of new homes leading to an increase in height for some buildings.

It means that the 150-home care village, nursing home and gym in the original proposals will no longer be built with much of the freed-up space now set to be occupied by the smaller affordable homes. Plans for nearly 200 car parking spaces have been pulled as well.

But a cinema, hotel, community hall and rowing club will still be included, while the scheme’s office space has grown from 3,000 sq m to 5,000 sq m.

A decision on the scheme, the value of which has gone up £250m to £1.5bn, is set to be made before the end of this year.