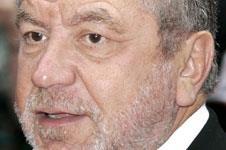 Lord Sugar has thrown his weight behind calls for the government to set a binding target for decarbonising the UK’s electricity supply to stimulate investment.

A raft of green groups, the Labour Party and even some Tory MPs have been piling pressure on the government to set a target for decarbonisation of a portion of the UK’s electricity by 2030 as a means of stimulating investment in the sector, ahead of a key stage in the passage of the Energy Bill throught Parliament today.

Last month, the government’s own climate watchdog, the Committee on Climate Change, released a report concluding a decarbonisation target was needed as part of a package of measures to drive green energy investment.

Building’s Green for Growth has also called for the government encourage investment in green infrastructure through greater policy clarity.

Writing in the Financial Times today, Lord Sugar said renewable energy was an area of “high-tech heavy engineering” where the UK could compete with India and China.

He said: “Having spent more than 45 years developing technology, I find it disappointing to see that the government has not seized the opportunities offered by this innovative sector.”

“Renewables companies have shown they are ready to invest in Britain, but they need to see a commitment from this government that they are serious. To create jobs here, they need real certainty - and that will require a proper ‘decarbonisation’ target in the forthcoming Energy Bill.”

But he said the government’s current policies were causing investors to put plans on hold or to scrap them all together. He pointed to a decision by wind turban manufacturer Vestas last year to drop plans for a plant in Kent as an example of this happening.

He added: “Without a 2030 decarbonisation target the energy bill will be aimless, leaving businesses and potential investors with prolonged uncertainty and no real commitment from the politicians who were supposed to be the ‘greenest government’ ever.”