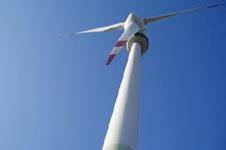 Lack of demand for wind turbines is forcing the world's largest turbine producer, Vestas Wind Systems, to cut 1,900 jobs, mainly in the UK and Denmark.

It is to completely close its UK turbine manufacturing plant on the Isle of Wight, with the loss of 450 jobs. The job cuts overall account for 9% of the Danish firm's workforce.

Vestas said that that demand for wind turbines across northern Europe does not match supply levels, despite government drives to boost renewable energy.

The company has also announced plans to raise funds through a share issue.