Mace has unveiled plans to speed up high-rise building by 25% via a new type of offsite construction.

The new method, which is called High Rise Solutions (HRS), was worked up in partnership with Australian builder Hickory and has been developed from Mace’s earlier so-called ‘jump factory’ system.

The contractor is set to use the method on its 524-home N06 job on the former Olympic Athletes’ Village in Stratford.

It aims to have completed the N06 project for developer Get Living by November 2021 at the latest. 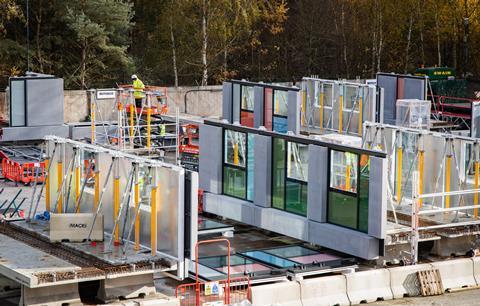 Mace’s jump factory, piloted on an earlier Get Living scheme, Victory Plaza, aimed to create a factory environment on the top of a tower block, inside which work was carried out before the factory was winched up on a weekly schedule.

Mace said that its new method integrates the offsite manufacturing approach from the jump factory with digital design techniques.

The firm said it will use modelling tools, such as BIM, and artificial intelligence to enable it to design and manufacture structure and facade modules off site.

The contractor said its HRS system has the potential to cut time on site by 25%, vehicle movements by 40% and construction waste by 70%. It said it would also increase site safety.

Mace has also officially launched its new arm, Mace Tech, designed to develop new offsite construction methods. It is being headed up by Shaun Tate.