Refreshed construction pipeline shows £7.6bn of new project starts in the Greater Manchester area over the next three years 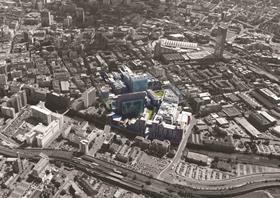 There will be £7.6bn of new construction project starts in the Greater Manchester area over the next three years, with commercial and housing schemes driving growth, according to a refreshed construction pipeline for the region published last week.

Construction growth over the period will be driven by £3.2bn of housing projects and £3bn of private commercial schemes, as part of a total £9.5bn construction output pipeline for 2014-2017, according to the pipeline published by Greater Manchester Chamber of Commerce (GMCC).

GMCC said an additional £3.8bn of project value had entered the region’s planning system in just seven months since its last pipeline update in November.

The pipeline includes £7.6bn of projects expected to start over the four years to 2017.

The pipeline uses data provided by construction analyst Barbour ABI, which is owned by UBM, the publisher of Building.

The leader of Manchester City Council Richard Leese told the conference he was bullish about the region’s economic potential: “We can be confident about the future. There will be upward trajectory over five years and that will accelerate.”

But he warned the region “has a real issue with quality of housing” and said volume housebuilders “never cease to disappoint” with poor quality homes.

He said: “There’s no excuse for poor quality housing. It’s very important for the future quality of the city that housebuilders don’t see their job as simply building homes but creating places.”

RIBA president Stephen Hodder, whose practice is based in Manchester, said the region needed to do more to “retain talent” in its construction sector and stem the flow of professionals migrating south.

He said: “I’m not sure there’s the capacity in the North-west. I worry about the ability of the professions to deliver as the sector returns to growth. I worry there’ll be a weak link.”