Mayor launches scheme to get more black youngsters in construction 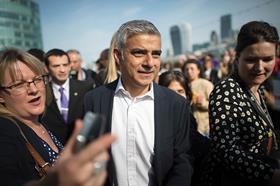 London mayor Sadiq Khan (has launched an initiative to help tackle the unemployment levels of young black men in London, focusing on the construction and digital sectors.

Black men aged 16-24 are among the most likely to be unemployed in the capital – 32% compared with 14% for young white men, with the new Workforce Integration Network designed to address this.

Khan (pictured) said the initiative will initially focus on increasing the number of young black men in the capital’s construction and digital sectors.

London’s construction sector accounts for 5% of total jobs in the capital but black men aged 16-24 make up just 8% of young men working in the sector, compared with 83.5% for white men.

Rather than focusing on “skilling up” young black men, the new initiative calls on businesses to attract and retain the brightest talent from all backgrounds, and to ensure they are actively addressing any current gaps in their workforce.