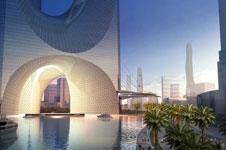 The developer behind the $95bn (£64bn) Jumeira Garden City development has said it will scale back plans for the venture.

Meraas Development said it would reveal detailed plans for the project early next year, but that the “worldwide economic downturn” meant it had to “ensure its business strategy is aligned to make the most of new opportunities.”

A statement from the developer put a brave face on the scaling back of Jumeira Gardens’ plans.

It said: “We are simply reviewing our business strategy, as well as the phasing and rollout of the Jumeira Gardens project to make sure the development proceeds in the most opportune way to meet changing investor needs.”

Meraas admitted on Monday that the Jumeira Garden City would be delayed. It is just one of the many proposed developments that have been thrown into doubt as a result of the financial crisis in the Middle East.

Jumeira Garden City was first unveiled just two months ago, at Cityscape Dubai. It has as its centrepiece three towers known as 1 Dubai. Projected to be more than 600m tall, 1 Dubai has been designed by Adrian Smith and Gordon Gill, formerly of Burj Dubai architects SOM.