Labour claims it will boost number of homes built per year to 200,000 by end of the 2020 parliament 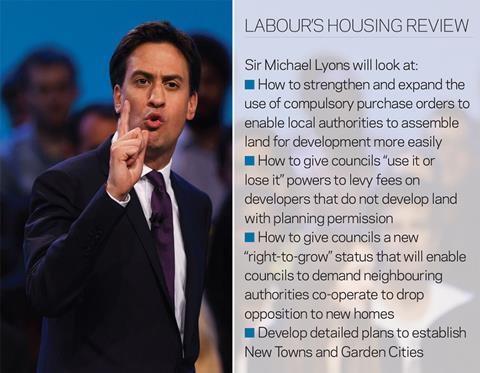 Ed Miliband sought to burnish Labour’s credentials as the party of housebuilding and construction this week with a pledge that, if elected to government, Labour would boost the number of homes built to 200,000 a year by the end the next parliament in 2020.

However, Labour’s pledge to get Britain building “on a grand scale” was partly undermined by a warning from Ed Balls, the shadow chancellor, that Labour could withdraw its support for the high-speed rail line to the north of England.

The housing announcement, which came in Miliband’s keynote speech to the Labour party conference in Brighton, did not include any commitment to additional capital spending, other than the £10bn in spending the party has already said should be brought forward to fund the construction of 400,000 homes.

Instead, Labour said it had appointed Sir Michael Lyons, a local government finance expert and former BBC Trust chairman, to lead a review designed to ensure that an incoming Labour government would be able to swiftly introduce reforms to boost housebuilding numbers (see box).

Speaking on the conference fringe, shadow housing minister Jack Dromey said councils, working in close partnership with housing associations and housebuilders, would be the “key engine of delivery” in Labour’s proposed housebuilding drive.

He said there was no “silver bullet” to tackle what he described as an acute housing crisis, but said bringing SME builders back into the market and expanding self-build and the private rented sector were all part of the solution.

He also backed further institutional investment in housebuilding including the use of council pension schemes, plus the creation of new towns and Garden Cities – a policy developed by deputy prime minister Nick Clegg that is currently stalled in Whitehall.

Dromey added that Labour would not “tear up” the government’s planning reforms, promising “continuity” for the housebuilding industry, but said alterations would be considered.

Responding to a question over whether the target of 200,000 homes a year is enough, Dromey told Building that meeting this figure was already a “formidable challenge”.

“We are talking about a scale of ambition that no government has engaged in for a very long time. Our aim is to double housebuilding.”