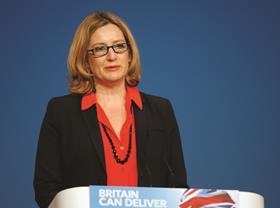 The energy minister has written to the big energy firms pressuring them to end delays in payment to contractors which have completed energy efficiency work under the government’s Energy Companies Obligation programme.

But installers have complained they are not being paid for work they have completed, with delays of several months reported.

Andrew Warren, director of the Association for the Conservation of Energy, said that late ECO payments were a “big worry” for installers.

This month Amber Rudd, who was appointed energy minister in the government reshuffle in July, wrote to energy companies stating that she is “concerned […] the department has continued to hear about delays in payment through the supply chain”.

Rudd’s letter, seen by Building, added: “It is essential that all parties are reasonable and work to avoid situations where genuinely compliant measures are subject of payment issues.”

She added that she understood payment issues “often related to the treatment of hard to treat cavities” due to a review being undertaken by Ofgem of this area of work.

The review followed concerns that work defined as hard to treat under the ECO in 2013 was not complex enough to qualify for that definition. The review is expected to conclude by 31 October 2014.

The findings of the review will have an impact on how much work on hard to treat cavities the energy companies need to do this year to meet their 30 April 2015 obligations.

Contractors believe energy firms are withholding payment until they know whether work will count towards their obligation.

Rudd said energy firms should get suppliers to use Ofgem’s set of standard templates for reporting ECO work to “improve transparency”.

A spokesperson for Energy UK, which represents the big energy firms, said the ECO was “much more complicated than previous schemes” and it was working with the Department of Energy and Climate Change and installers “to make administration easier”.