Morgan Sindall and Amec in legal row over £16m hotel 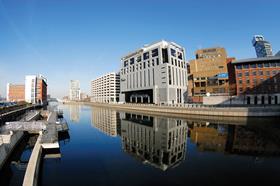 Contractors Morgan Sindall and Amec are locked in a legal row over a £16m hotel project in Liverpool, Building can reveal.

The dispute centres on the responsibility for liabilities arising due to defects on the Malmaison Hotel and Apartments project on Liverpool’s historic Princes Dock, which Amec argues were transferred to Morgan Sindall as part of the sale of its construction business to the firm in 2007.

According to papers filed in the Technology and Construction Court and seen by Building, Amec is suing Morgan Sindall to recover £7.5m in costs it incurred through the rectification of “serious defects” at the hotel.

Amec won the £16m contract to build the 11-storey hotel and apartment complex in 2005, with the project completed in 2007.

The hotel, designed by architect Leach Rhodes Walker, has 131 rooms and suites as well as a brasserie, a leisure suite and conferencing facilities, with the top five storeys set out as 41 luxury apartments.

“Prompt and comprehensive rectification was required due to the serious safety risk associated with the defects,” the court papers said, with Amec undertaking the works at a total cost of £7.5m.

The court papers state that as part of that deal Amec paid Morgan Sindall £44m to cover liabilities transferred in the sale and that the two firms agreed that “in relation to certain contracts Morgan Sindall would be liable for the rectification of defects of which it knew or ought to reasonably have known”.

It added: “The Malmaison building contract was such a contract.”

Amec argues that Morgan Sindall “knew or ought to have known” of the defects as a large number of employees from its construction business transferred over to Morgan Sindall as part of the sale, including workers “intimately involved in the construction of the Malmaison hotel”, while the defects on the project were set out by the client.

The dispute over the Malmaison hotel is not the first time Morgan Sindall and Amec have come into difficulties over legacy projects stemming from the sale of Amec’s construction business in 2007.

The two firms are also involved in a dispute over their high-profile £150m nuclear submarine jetty project in Scotland, with the firms seeking to limit their liability for the project’s estimated £94m cost overruns.

As revealed in Building in 2012, the firms could be forced to bear a combined total of at least £50m in costs due to ongoing delays to the Faslane SSN Berthing Project - also known as the Valiant Jetty - which started in May 2004 and was due for completion in October 2008, but was finished more than four years late.

Amec was originally sole contractor for the jetty, but after Morgan Sindall acquired Amec’s construction business, which had been part of the team working on the job, this left the project a 50:50 joint venture between Morgan Sindall and the remaining independent Amec business.

Amec has since been engaged in a long-running battle with the Ministry of Defence over the extent of the firms’ liability for the cost overruns under the contract.