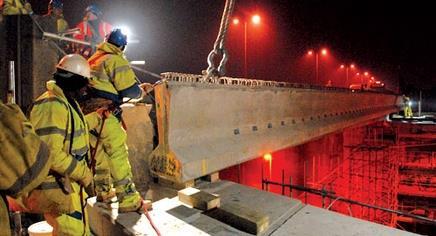 Morgan Sindall’s infrastructure division will become its biggest source of cash as the credit crunch bites, according to the company’s executive chairman.

After announcing strong results for the six months to 30 June, John Morgan said its Morgan Est arm had the biggest growth potential in the current market.

He said: “Infrastructure is a key growth area; other areas like fit-out and commercial property will soften.”

Deals include the £90m widening of the M1 between junctions 25 and 28 (pictured).

Overall, turnover in the half-year grew 48% from £836m to £1.24bn, largely thanks to what Morgan called the “transformational deal” with Amec. Turnover growth was 4% with the Amec deal stripped out.

Morgan said the company was “keeping a close eye” on the fit-out arm and conceded the business, which includes the Overbury brand, may suffer in the downturn. He also said the Lovell affordable housing division was having a tough time, but added: “We’ve come off a hell of a boom in recent years.”

n Utility infrastructure specialist Morrison Utility Services has doubled pre-tax profit in the year to 31 March 2008, from £10.2m to £20.4m. Turnover at the group, which was sold by Anglian Water Services to two private equity groups for £135m in March, rose 4% from £472m to £493m.