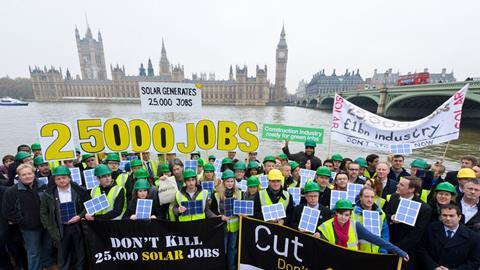 Pressure is mounting on the coalition to step back from its plans to cut the feed-in tariff for solar power as the industry lobbies Parliament and Liberal Democrat MPs speak out against the plans.

Last month the government announced plans to cut the FIT paid to homeowners and business for their surplus solar electricity from 43p per kWh to 21p per kWh from 12 December.

On Tuesday around 300 people employed in the solar industry lobbied at Westminster to get the government the change its plans.

Howard Johns, chair of the Solar Trade Association, which organised the rally, said: “All of this is focused on getting David Cameron’s attention, to get him to intervene and fix the problem the government has created.”

Johns argued the cut was due to a Treasury cap on the funds available for the tariff, adding that the boom in solar power could be funded from under spends in other areas of the Department for Energy and Climate Change’s budget.

Meanwhile, Liberal Democrat MPs have admitted they are “unhappy” with the government’s plans.

Bob Russell, MP for Colchester, said: “I have been doing what I can, and continue to do so, to try and salvage the tariff for community projects, schools and social housing.”

He said adjusting the tariff to ensure the poorest households could still benefit, preserving some demand in the solar market, was the best which could be hoped for.

Russell is one of three Lib Dem MPs who has signed an early day motion petitioning the government to reconsider its plans and timescales for the cut.

Tessa Munt, MP for Wells, who has not yet signed the motion, said she had raised her concerns with energy secretary Chris Huhne. “The FIT cuts will have a devastating impact on the fledgling solar panel industry and on trust in a government with such a high-profile ambition to be the ‘greenest ever’,” she said.

To add to the pressure, Mayor of London Boris Johnson has written to Chancellor George Osborne calling on him to drop the plans. “A reduction of 50% in the FIT effectively slowly suffocates the growth that this policy has so far encouraged,” he said.